I was honored last week to accept the Changing the Conversation Award from DC Campaign to Prevent Teen Pregnancy. DC Campaign has been very successful at reducing the rate which, just in the last six years, has decreased dramatically in teens ages 15-19 from 54.5 to 28.2 per 1000. Or to look at it another way, in hard numbers over a longer period, we?re talking about 999 births in 2006 and 458 in 2016 — the most recent year for which we have stats. That’s more than a 50% decrease and this is a very good thing, and well worth applauding. But as the DC Campaign will tell you, it isn’t yet good enough. And this is true for a number of reasons: first, though the rate is lower here than in demographically comparable cities like Philadelphia and Baltimore, it is still higher than the national average, and second, because the numbers in some wards of the city are still just unacceptably high.In Wards 7 and 8 in 2015, there were 278 births while in Ward 3… one. Chevy Chase, Cleveland Park, AU Park, Cathedral Heights, Friendship Heights. One. And lest we think this is strictly a matter of race, the difference between the rates for black teens outside Ward 8 and inside Ward 8 is significant. The combination of poverty, unemployment, high female-headed households, crime, and low rates of school completion — what Child Trends calls “community disadvantage” — is at the heart of the problem. 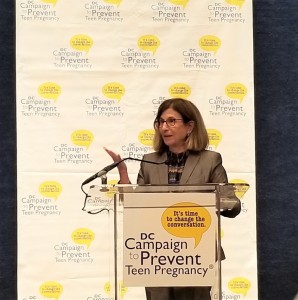 And what is striking, if less apparent, about the numbers, is the overall impact that they have on the well-being of multiple generations. Teen moms and their children — without other kinds of interventions — generally do not fare well: pregnancy often means dropping out of high school, or not attending college, or both, and this is linked to a similar pattern in the next generation. Of course there are interventions — at the Catalogue for Philanthropy: Greater Washington, which I founded in 2003 and where DC Campaign has been featured since 2004 as one of the best community-based nonprofits in the Washington region, we see a wide range of efforts that help prevent teen pregnancy both before and after it has occurred: in programs that keep teens off the streets and deeply engaged in after-school arts, or sports, or educational enrichment; in programs like Generation Hope, which works with teens who DO parent — to complete their education, and to focus on the child as well for a two-generation approach to ending poverty; or in schools like Columbia Heights Education Campus whose MCIP program helps fund an on-site day care center and program for teen parents that is very successful at keeping parenting teens in school and thus short-circuiting the intergenerational repetition of the problem.

But at least in these latter two examples, it’s a case of closing the barn door after the horse is stolen. Until we solve the problem of “community disadvantage” and bring the teen pregnancy rate to zero we need these programs, but to address the problem now we need the DC Campaign to help parents talk to their kids about sexual issues, to invest in the after school programs that are effective at engaging them productively, to talk to boys as well as girls, and to their parents about sexual health, to advocate on behalf of teens, and to make contraception widely available. DC Campaign’s simple assertion “there are only two ways to prevent teen pregnancy: don’t have sex or, if you do, use contraception” — may sound simple, but simple it is not. We need to keep at it, to work with teens (and their communities and families) on delaying sex, preventing pregnancy, and ensuring more promising lives for them and for the children they will bear in their 20s and 30s when they have finished school, have decent jobs, and are ready for the demands of parenthood and of life. 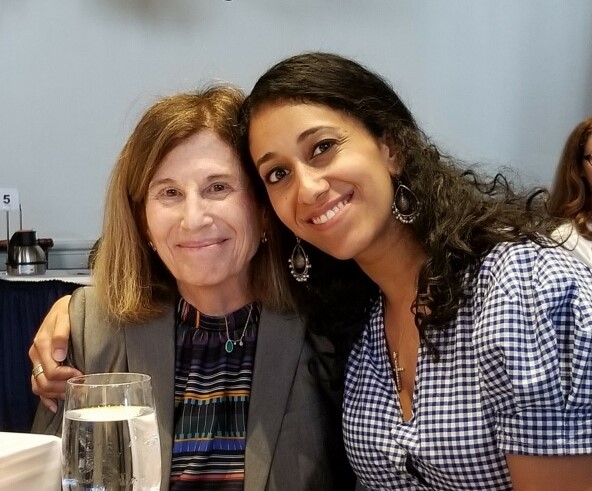 Barbara and Amira El-Gawly, one of the Catalogue for Philanthropy’s board members, at DC Campaign’s May 2nd Change the Conversation Luncheon

Because one thing I think we can all agree on is that we want a better life for all of the children who live here — not just for our own. I have a very young granddaughter who lives with her parents in Ward 3. One of my many wishes for her is that she will do what her mother did and have a child intentionally in her late 20s when she is fully and happily ready to be a parent — economically secure, parenting with a spouse (or partner – because parenthood is a joy, but at the same time it is not easy to do alone), diplomas in hand, ready and eager to take on the world and to take on …another life. I think we all want to see community disadvantage become community advantage — but that is a long haul and, in the meantime, this right here, this work — this is something we can do now. We are already doing it, and we must continue the work. Our lives — and the lives of all of “our” children — depend on it.