In a place like Washington DC, when people think of power and politics, they think of the President, Congress, CEOs, or lobbying chiefs, but Mikva Challenge DC is on a mission to reshape that perception. Mikva DC exists to enhance the expertise and power of young people to create change, and to inform both local and national policy making. Modeled after the successful civic engagement programming developed for youth in Chicago, Mikva Challenge DC develops youth to be empowered, informed, and active citizens who will promote a just and equitable society.

One way Mikva DC students ‘do civics’ is by speaking out on how to address issues in their communities via an annual citywide speech competition called Project Soapbox. This past December, students took to the stage to speak about a range of deeply important topics, like mental health support, LGBTQ discrimination, racism & xenophobia, food deserts, and homelessness. 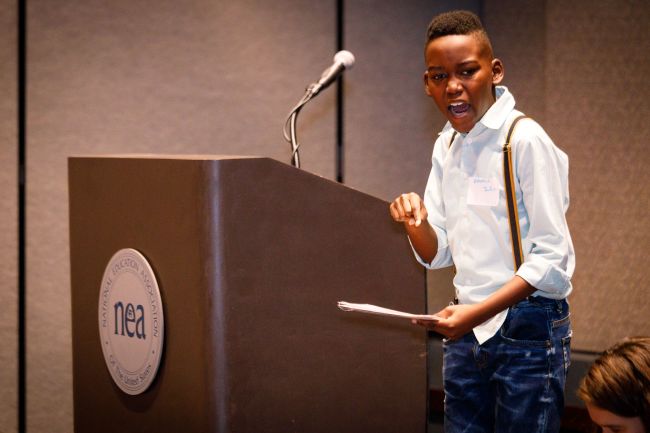 One of this year’s competition winners, Nehemiah Jackson, enthralled the room when he proclaimed from his soapbox:

“When I grow up, I want to put an end to this nonsense. I believe that police officers need a punishment for brutality. My solution is for police to have better training on how to deal with the public. Better and longer training would help police understand that people might have mental illnesses or might be nervous when stopped by police. During training police learn state laws, criminal investigations, patrol procedures, firearms training, traffic control, defensive driving, self defense, first aid, and computer skills. But something they don’t learn is how to help people with mental illnesses. Something they don’t learn is how to deal with scared citizens, something they don’t learn is how to handle their own anger. Also, how about we can create non-deadly weapons that don’t kill. It seems to me if you can send Rovers to Mars, have cars that drive themselves, then why can’t we make weapons that don’t kill?” 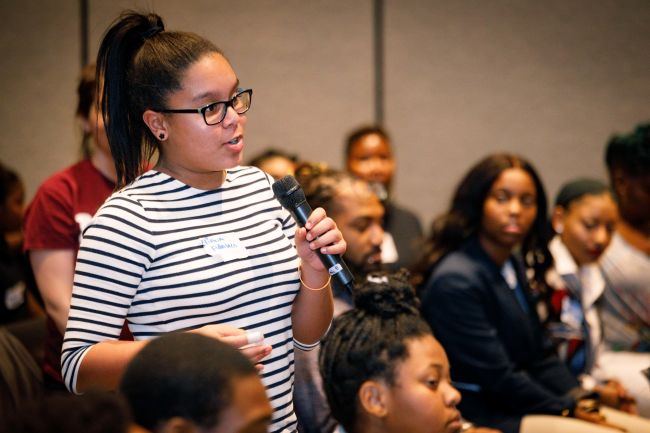 After experiencing a day of these incredible speeches, one student remarked: “I am not done in this fight. There are others struggling like I am and our challenges united us. I feel inspired seeing my peers use their stories and identities to fight for change.”

It was not just students and the Mikva DC staff who felt the power in the room. As Jenny Abamu of our local NPR station, WAMU, said: “Though there is only one winner, students didn’t treat the event like a contest. They encouraged each other – judges listened and responded to some impassioned performances by noting resources for students dealing with crises. Many students said they wanted to raise awareness. In this way, they were already winners.”

Mikva Challenge DC’s credo is that young people who do civics will help make the nation become its very best democratic self. And who can argue against that when you hear, see, and experience the vision and power of DC youth for yourself?