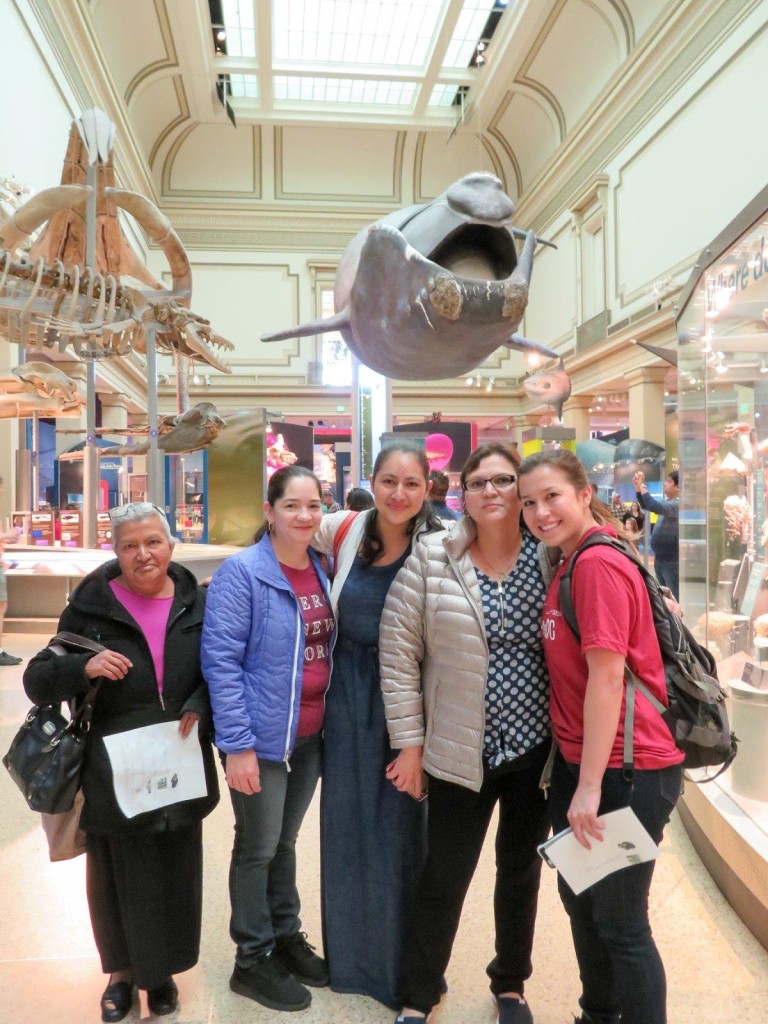 “I’ve never been to the National Mall before,” said Juan, as he sat on the Metro heading towards the Smithsonian.

“Now that I know how to ride the Metro, this will be easier to come by myself,” his friend Pedro declared. Soon they would both be experiencing the National Mall for the first time in their lives.

They were among the sixteen students from Casa Chirilagua‘s Yo Hablo Ingles English Language Learning program to take a field trip to DC in late April. Soon they would be seeing the sites and practicing their English through a scavenger hunt. Volunteers from Restoration City Church accompanied their peers to support each student with their English skills.?Students arrived on the National Mall in wonderment, marveling at the beauty of the famous horizon. Some began taking photos of the Washington Monument while others pointed out, “Look at the water! Look at the ducks!”

Their first stop was the National Museum of Natural History. When students entered, they were immediately greeted by Henry, the museum’s elephant. They were impressed by the rotunda and began to explore this area and take photos. For many of the students this was their first time to the museum.

“It was really awesome!” exclaimed Marilu, “I need to come back with my daughter.”

During their trip students practiced English by finding exhibits in a scavenger hunt and earning points for each discovery. Various animals were among the exhibits as well as the famous Hope diamond. More photos ensued!

Afterwards, the students enjoyed a sunny picnic in front of the National Monument. Reflecting on this visit, Maria noted that, “It was great to come on my own without my kids to explore and really enjoy the sites.”

This was particularly true for students who work in the city but have never had the opportunity to enjoy the museums and National Mall. A team of volunteers provided childcare back at Casa’s community center so that parents could enjoy this trip with their classmates.

Students took advantage of many opportunities to practice English conversation with the volunteers. They were very patient and helpful as students eagerly conversed with them. Later Mario commented, “It was beautiful to share with you…I tried to take away my fear. Thank you because even if you don’t understand me you try to talk with me. You are cool.”

Their final stop was the Jefferson Memorial. As they walked the Tidal Basin students were amazed by the surrounding trees and enjoyed the refreshing walk along the waterfront.

“It’s beautiful!” said Adriana as she saw the impressive marble monument in the distance.

“I love the tour!” Jose agreed. He was very excited as the group walked to the monument before the group returned to the Metro.

It was a joyful day as students deepened relationships with volunteers and each other while building stronger English language skills. As students bring their newfound language skills into the world they will have the confidence, support and knowledge to flourish. We are grateful for your support and to the amazing group of volunteers who make this possible. As Jorge says, “Thank you for your time that you are providing us for the trip. It was very nice! We learned a lot in the museum. God bless you.”