Last week the region watched — and waited — to see how the news of WMATA’s Metro shutdown would affect daily commutes. With more than 700,000 daily riders on metro trains, most riders who were unable to telework were left to take to the roads by bus or by car. But for one local organization, the shutdown was an opportunity to bring attention to another commuting alternative: bicycling!

Following last week’s announcement, Washington Area Bicyclist Association and its supporters sprang into action, encouraging commuters to give biking a try through guided bike pools across the region (#WMATAbikepool), distributing maps and tips on their blog, and meeting riders on local trails.

We caught up with Colin Browne, Communications Coordinator at WABA, to learn how they organized efforts so quickly following the news of the shutdown, and how they plan to carry this momentum forward through 2016 and beyond. 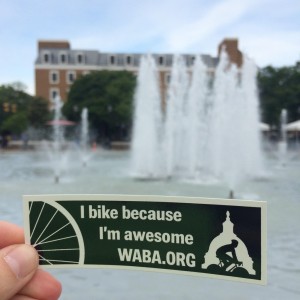 How did the concept for #WMATAbikepool start?

Colin: In the WABA office, as soon as we heard about the Metro shutdown, we knew it was going to be a big day for bike commuters, and more specifically, a big day for people to feel good about biking to work. We wanted to harness that enthusiasm before it just curdled into traffic schadenfreude. I put together a quick blog post and some social media posts that I hoped would set a welcoming tone for the conversation (especially on Twitter, which can drift into cynicism very quickly) and encourage folks to reach out to their coworkers and neighbors.

The idea for the #WMATAbikepool hashtag came from a member of our Women & Bicycles Facebook group named Anita Kinney, who used it and suggested that others do the same.

I think the hashtag worked because it was a grassroots idea that WABA was able to amplify. These sorts of campaigns, even when they happen very quickly, feel so much more organic when an organization can say “look at this cool thing that people are doing” rather than “You should use this hashtag.” It really provides an opportunity for people to feel good about the community that they’re a part of, instead of just having a logo and acronym telling them what to do.

Do you have a favorite “rider moment” from the day?

Colin: We set up a table to give away coffee and granola bars on the Met Branch Trail in Eckington. I showed up with my camera, planning to take a few photos of a busy trail and then head back to the office. I ended up staying for three and half hours and only took a dozen pictures because there were so many happy people to talk to. Data from DDOT said that biking on the trail was up 65%, and we gave away three times as much coffee as we normally do at our trailside coffee events.

My favorite rider moment was chatting with a woman who’d stopped for some coffee and was commuting on her bike for the first time. She had ridden twelve miles in from her home in Forest Glen on the Sligo Creek Trail. It was the longest ride she’d ever done, and she was beaming! She said she was already excited for the ride home.

Were there any big takeaways/key lessons that WABA learned on this day?

Colin: The experience really drove home how important it is to be able to not just react, but engage quickly with an opportunity like this. This could easily have been a situation where we pushed out some some generic, one-way content about biking to work and left it at that. Instead we had an authentic community moment that really let people feel how powerful their own energy and enthusiasm is.

What big projects is WABA currently working on?

Colin: We just finished off a yearlong strategic planning process and published a 5 year strategic plan. Out topline goals are to triple the number of people who ride bikes in the region by 2020, and ensuring that, by 2035, every resident in the region (we work in DC, Prince George’s County, Montgomery County, Arlington, Alexandria, and Fairfax County) lives within 1 mile of a protected place to ride a bike.

To find out how you can get involved with WABA, visit waba.org.